Opals are a popular stone in jewelry for many reasons: they provide a holographic, chrome effect, come in a variety of different tones and colors, and are relatively affordable in comparison to other gemstones. Large opals make a showstopping piece, while small opals can provide just a little bit of interest in smaller pieces of jewelry.

Let’s take a closer look at this gorgeous stone, its history, what they symbolize, and some of our favorite ways to wear them.

A Short History of the Opal Stone

Opals have been around for over 10,000 years and have been found in various areas worldwide, including Africa (mainly Ethiopia), the Americas, Australia, and Europe. Opals were mined similarly to other precious stones like hdiamonds, rubies, emeralds, and sapphires. Currently precious opals are now mainly mined in Australia, which provides over 90% of the world’s opal supply and where opals are the official stone of the country.

The word “opal” is thought to be derived from a Sanskrit word meaning “jewel.” While there are two types of opal, common and precious, we mainly think of precious opal when we think of the stone, as only precious opal has the holographic effects that we know and love.

Opals have held meaning for many different cultures throughout history due to their presence in many different areas of the world. Opals were prized by royalty along with other precious stones and were used to adorn crowns, jewelry, costumes, and more.

As mentioned, opals are known for their iridescent effect, but they also come in a wide range of colors that appeal to many different people with unique tastes. While the exact science behind the opal’s famous iridescence is complex, the general idea effect happens because of the internal structure of the stone, which diffracts light. Opal’s holographic, rainbow effects (also called “play of light”) have been compared to fireworks, volcanoes, galaxies, and other beautiful displays.

While some opal colors are synthetic, we only use genuine opals at Emily Amey. There are many varieties of natural opal colors, including:

How To Shop For And Care For Your Opal]

Opals are one of the softer gemstones out there, making them vulnerable to scratches from hard surfaces and even other australian opal jewelry you may wear. Although more delicate than other stones, there is truly no substitute for the beauty and magic of an opal. They should be cleaned delicately with warm water, gentle soap, and a microfiber jewelry cloth.

With so many options in size, color, and shape in opal jewelry, as well as beneficial properties, this stone is a perfect option for almost anyone. Emily Amey sources opals from various parts of the world, including Australia and Indonesia. Our opal jewelry collection includes necklaces, earrings, and bracelets and is set alongside high-quality 14k gold, precious stone accents, and more.  Shop our full collection online, or reach out to discuss creating a one-of-a-kind piece with the color size, setting options, and design you envision for your next piece.

Emily Amey is a New York local artist who works with both diamonds and gemstones to create unique, unforgettable pieces. She works with small-operation minors from around the world to source the best gemstones responsibly.

Back to all blogs
★ Judge.me Reviews 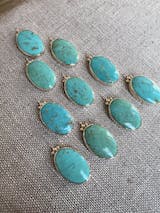